All About the $1.9T Stimulus Bill. At the time of writing, Bitcoin is trading at $56,300 after being rejuvenated by both the US Congress and Senate approving a $1.9 Trillion stimulus bill.

News surrounding the bill has injected optimism in both the traditional stock markets and the crypto-verse. The optimism could translate to Bitcoin recapturing $58k in the days to follow and ultimately testing $60k. The latter price value is possible given that the crypto fear and greed index is still low at 73 as opposed to the February highs of 90.

The Co-founder and CEO of Gemini Exchange, Tyler Winklevoss, has forecasted that there is a lot of institutional money coming into Bitcoin. According to Mr. Winklevoss, the majority of the capital owned by these institutions eyeing Bitcoin is still sitting on the sidelines. He went on to compare Bitcoin’s current price growth to a baseball game which is ‘in the second pitch of the first inning’.

Mr. Winklevoss shared his analysis of Bitcoin via the following tweet.

There is a lot institutional money coming into #bitcoin but most of it is still sitting on the sidelines. We’re in the second pitch of the first inning. 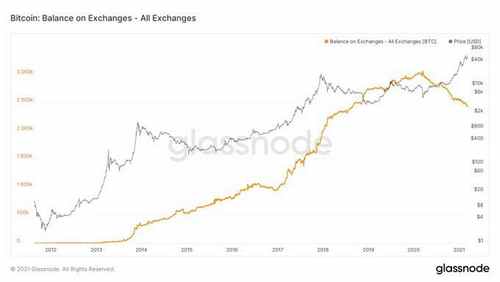 To note is that retail and institutional investors are continually accumulating Bitcoin and storing the digital asset offline. This is best demonstrated by a 20% drop in Bitcoin exchange balances since March 2020 when the amount of BTC deposited on exchanges was at its peak. The drop in Bitcoin balances on exchanges was shared by the team at Unfolded via the following statement and accompanying chart.

Bitcoin balance on exchanges continues to decline, down by -20% since the 2020 March peak. 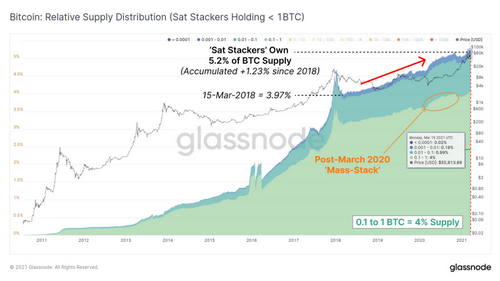 BTC Addresses Hodling 1 BTC or Less Have Been Stacking Since Mar. 2018